How do I read network-logs?

Network-logs allows you to see when your device tries to connect to the Onomondo network. Understanding them helps debug connectivity issues with the device.

There are two log types of network-logs that you will see in the network-log section (using the API terminology):

There are also two technology types:

Note: The general terms GSM and data will be used when describing the technologies in this guide. For common debugging scenarios using network-logs, please see the section below

How do they work?

Here is a quick run through about how the network-logs are generated.

1. Device requests permission to attach to the GSM network.

While in some device setups, the data connection may be first, frequently it is the GSM log that appears first. Sometimes, a GSM connection may not occur. Also note that within technical module documentation, this would also be referred to as the "circuit-switch network"  and can be checked with the AT command - "AT+CREG?"

The device will start attaching to our network by requesting permission. Our response to the request will be either to allow it or deny it. This will appear as a network-authentication log.

If the network is on your network whitelist, the device receives the response that it is allowed to attach otherwise it will be denied. Sometimes a device will try to connect to a network that is not on our platform. This will also be denied. You can change this by updating the network-whitelist attached to the SIM. Updating networks in a network-whitelist will happen in real-time. Afterwards, the next time the device tries to connect to a network it will be allowed /denied. If you're not seeing new connection attempts read the troubleshooting section.

If it isn't allowed to attach, the device, according to standards, should add this network to the forbidden list on the SIM and move on to the next network. Once it has been denied, it will not try to connect to the data side of the network.

The SIM information is added to the network, allowing the device to use it to SMS to and from the device (if applicable). For security purposes, SMS can only be received and sent through our platform.

3. Device requests permission to attach to a data network (2G/3G/4G)

In technical documentation data connections are also referred to as packet-switched network connections and can be checked with AT command  AT+CGREG? or AT+CEREG? depending on the technology.

Just like in a GSM authentication, the device will request permission to connect to our network. If the device has given permission of the same network in GSM, this will occur quite quickly.

This occurs when the PDP context is activated and attached to the network. At this stage, an SSL/TLS connection does not need to have been established.

Finally, the device will attach to the network, allowing it to be able to send data.

For more information on any of the network logs, you can click on the row you are interested in. This information is also available via the API using a network-logs request.

If you are seeing no network-logs but your device is saying it cannot connect, then it has never tried to reach out to our network to ask to connect. If using AT commands try following these steps to make a connection.

However, if the device was turned on while the SIM was deactivated. it may have written all networks into the Forbidden network (FPLMN) list and will need to be cleared.

When the device has been allowed to use a network for data but there is no attach record, one of the most common issues is that the APN has not been set properly. Sometimes this value can be stored in the memory of the device, so make trying to reset the APN and then the device to see if the APN issue persists.

Another reason could be that the device is not activating or attaching the PDP context. If using AT commands, you can follow the steps in this guide. 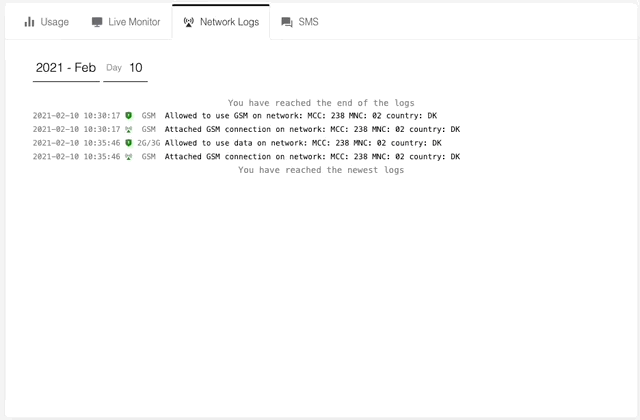 Network-whitelist was changed but the same networks are connecting

A network-whitelist currently is only changed when a SIM is deactivated. Toggle the activation of SIM off than on. There doesn't need to be a time period between the toggling. The longer the SIM is offline, the probability that the device might attempt to connect to a network while deactivated. This can cause some devices to add these networks to the forbidden network list on the SIM and will need to be cleared before the device will connect to the specific network again.

Device not connecting to a specific network since it has been added to the network whitelist.

If these devices have previously attempted to connect to a network and it was denied, it will write the network into the forbidden network (FPLMN) list and will need to be cleared.

This also includes scenarios where a device tries to connect in a country where there are no networks whitelisted, which have since been added.

If you are seeing a device continuously trying to connect to the same network, it could be because the device is actively clearing the FPLMN list when the network can't find a network to connect to.

It could also be an unusual network setup, where the device has connected to a GSM network but is trying to connect to data on another network that is denied. If this is the case, please write to us to look into it.